Chkrlet is not a new hybrid sort developed in Chernobyl. It is a blend of Škrlet (75%) and Chardonnay (25%) from Ivan Kosovec’s vineyard in Moslavina. Chkrlet is not intended to pose as a wine unlike no other or to pretend such blends have never been made before. And Chardonnay is not added to Škrlet in order to “fix” this authentic variety.

Ivan Kosovec has already redefined Škrlet through his 2011 Selection and the regular label of the same vintage. Also, with a completely different, but still exquisite 2012 Škrlet, which was almost completely exported.

However, less fortunate years followed. For example, in 2014, when grapes were healthy despite minimal vineyard protection, at least until one of the biggest floods of that year happened. Then, in an otherwise beautiful 2015, a hailstorm caused 100% damage to the grapes.

As if cultivation without pesticides isn`t risky enough, force majeure decided vintage 2016 as well, when due to spring frost and hailstorm 80% of the harvest was ruined.

Thus, the Chkrlet is the result of the series of unfortunate events, made out of what survived the calamity. Ironically, as if nature itself has picked best of the best, the first scent of Chkrlet reminds of the 2011 Selection Škrlet at its prime. In its typology, one of the most significant white wines which appeared on the market lately.

The 2016 Chkrlet is completely dry, clear, light and drinkable, yet very aromatic with a welcomed touch of rusticity. Apple compote, on the unknown spiciness from maceration or aging on lees, but without wood.

Fine golden tannin with sharp and electric acids ideally spread. An evident quality of extract at 12,5% alcohol enables that tension on the pallet during the first sip and drives thirsts for more.

Thanks to the good dynamic and liveliness in the mouth, with an even finish and without any perceivable weight, Chkrlet works as a quick sip wine, but with a lasting impression. However, we found one objection: there are only around 1000 Chkrlet bottles.

Luckily, Ivan Kosovec keeps some of his equally precious red wines in his cellar, positioned underneath the old 19thcentury Moslavinian house. Franovka, whose blue and red grapes seem “home-made”, artisanal. Non-anaesthetized, restless union full of life with an intense presence on the palate.

Rustic Zweigelt with a character, with noble earthy reminiscence, leatheriness, meatiness, and deep dark berries. Pinot Noir, a wine of complexity with fruitiness at first.

In the aftertaste, various sensations echo, from ripe mulberry to stony minerality followed by the melting of dry tannin. A cold freshness remains persistent on the palate.

On the Kosovec back labels, it reads<. “Neither fined nor filtered material”. Uncompromising when it comes to pesticides during growing and winemaking, Ivan Kosovec insists on handwork in the vineyard and not-interventionist techniques in the cellar.

He persistently insists on not using oenological products or selected yeasts and doesn’t make any additional corrections or filtrations.

Škrlet is a sort of unknown origin. Due to its presence in Moslavina, it is considered an authentic sort of that area. There is even a street in Moslavina dedicated to Škrlet! Roads that lead to cellars on the south slopes of Moslavačka hill are named after wine varieties, and one of the highlighted places belongs to Škrlet Street. 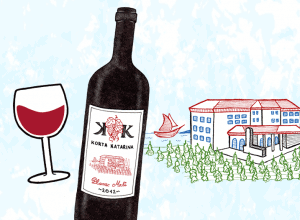 Wineries
Korta Katarina – A Plavac Palace
Nov 28, 2020 | BE THE FIRST TO COMMENT 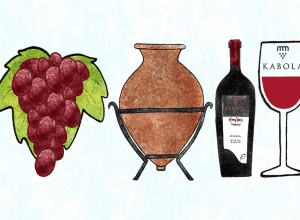 Wineries
Kabola – A Nickname for quality Istrian Wine
Oct 11, 2020 | BE THE FIRST TO COMMENT 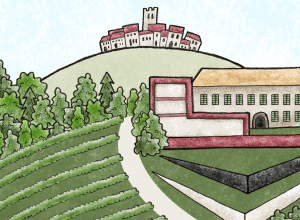