Mar 08, 2018 | BE THE FIRST TO COMMENT
Vinart Grand Tasting – From the wines under the sea to the ones buried in amfora

Two days ago, a long promenade wine tasting of 120 selected wineries in Lauba house ended, leaving us wanting it to last at least a day longer. The Vinart Grand Tasting is already the most serious and significant wine festival in Zagreb, gathering industry professionals, sommeliers, international wine buyers and wine lovers in Zagreb for the third year in a row.

What we enjoy especially are the workshops that announce the two-day promenade tasting of wines, starting each year approximately 2 weeks before the festival itself. They are the best way to get familiar with the indigenous grape varieties of Croatia, taste special wines winemakers bring out of the cellar and get to know more about the specific winery and the winemaking practices.

The new dimension of amphora wine

Marino Markežić, owner of the Kabola winery, led us through the development of Malvasia Istriana in Kabola wine cellars in Buje, Istria. From the most refreshing to the purest versions of the most complex wines, matured in amphoras.

“A touch of oxygen in winemaking is welcomed. Usually, it comes through oak but when we age wines underground – the air comes in through soil and clay,” explains Markežić. You can picture the air moving through the particles of Istrian white land where Kabola has its vineyards and then struggling to get in through clay –picking up a bit of aroma and flavours along the way. That specific signature combined with longer maceration comes through in each bottle of Kabola Amfora.

We also tasted one of few bottles of Kabola Malvazija from 2010. If anyone thought young and fresh Malvasia can’t hold on with time – they are wrong. Only inox and after 8 years in bottle, you still have preserved freshness, developed aromas of more serious, riper fruit and that pleasant bitter touch to the wine.

Kabola is also the first winery that is making Teran in amphoras – and we had a chance to taste the first samples of the Teran Amfora 2015. Although expected to have young, rough tannins due the longer maceration process, it was soft and incredibly ready for consumption. A lot of fresh red fruits, cherries, and blackberries coming out of the glass with spices and earth notes. Really looking forward to tasting this wine again!

Incredibly relaxing and fun was to listen (and taste) about the wines aged under the sea. Yes, more and more Croatian winemakers are exploring the benefits of the stable temperatures, tranquillity and no direct sunlight found under the sea level. Like us, wines tend to benefit from that serenity hard to find on the land. Well, at least some wines. We have learned that others (roughly 80%) got worse after being under the sea.

The “Coral Wine” project workshop showed us the differences between the same wines aged in the winemaker’s cellar and the ones under the sea. One of my personal favouritesand the one that showed significant difference was the Griffin Darkside barrique 2015. If you are Beaujolais Village lover like myself, you will enjoy this rich and elegant red wine out of Portugizac. Krešimir Ivančić from the Ivančić winery was one of the first in Plešivica, to give more character to the Portugizac – often thought and sold on the market as young and fruity red, without any perspective. Yes, very similar to Beaujolais Noveau.

Aging under the sea amplifies the richness of the fruit flavors, rounds the structure of the wine by integrating the acidities much better than the same wine did in the cellar.

“The process of aging under the sea, accelerates the process of maturing wines by 3 – 5 times, at least,” says Krešimir Ivančić, according to so far tasted examples. “But, you need to have great material to work with.”

Surprisingly, this was the only wine workshop that ended with – beer, and not just any beer, but the ones matured under the sea also.

For now, the only commercial line of “Coral Wine” is the Kabaj wines you can shop in Wine&More webshop here. Kabaj Rose 2011. is amazing!

The most important label of the Damjanić winery – red Clemente

This was the first ever vertical tasting of the most important label of the Damjanić wine cellar. Winemaker Ivan Damjanić showed us how he was evolving along with his red blend, from the beginning in 2008. all the way to the latest vintage of 2013.

Bordeaux with Istrian signature, red Clemente is Merlot dominating blend with Cabernet Sauvignon, Teran and Borgonja. A powerful red wine that showed great potential for further aging. 2008. one of the first vintages of red Clemente made is still on the rise. The liveliness of the fruit, blackcurrants, dark cherries is followed by ripe aromas that discover that the grapes back then, were picked when they could gather a team of workers. And just that simple fact gives power to 2008. vintage. Part of the grapes was picked when they wanted and the other part, very ripe – giving the sweeter sensations in just about the right amounts. This was the vintage that was clearly saying, this is the wine as it once was made – you can sense the traditional approach.

Side by side with the wines, winemaker Ivan Damjanić made significant improvements year by year. Investing in new oak barrels, significantly reducing yields, defining the right time to pick each variety but still staying loyal to the original concept of the red Clemente – the new vintage of 2013. seemed to me as the best so far. A wine that is already on the market, because of the small quantities will become a showstopper from your wine cellar in few years. In this young stage of life, the wine is full of lively red fruits, blackcurrants and earthy, leathery notes with spices, vanilla, and pepper.

Find some of the last bottles of earlier vintages of red Clemente in Wine&More webshop. 2011. had riper fruits with a scent of tomatoes, vanilla and earthy, dusty notes. Definitely darker type of wine. 2012 was the most similar to 2013, in fact, those two vintages were showing many similarities, from the freshness of the fruits, well-integrated oak aromas and flavours and the capability for aging.

The easiness of drinking Škrlet

Lighter bodied and low in alcohol, Škrlet made us wish that it was summer and we could enjoy refreshing sips from somewhere by the Adriatic. Instead, snow was falling heavily that day in Zagreb.

The one thing you will appreciate the most when it comes down to the Škrlet wines is the easiness of drinking. Coming from the loam and clay soils in the vineyards of Moslavina, tasted samples are very light in colour and seducing on the nose. Flowery, fruity and fluttery – the sommelier Mario Meštrović concluded: “This is the wine we want to have on our wine lists!” 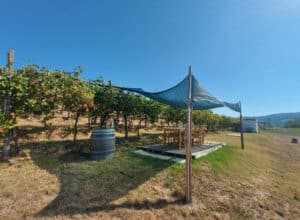 Wine for advanced users
Croatian Origins of Zinfandel Wines
Dec 11, 2021 | BE THE FIRST TO COMMENT 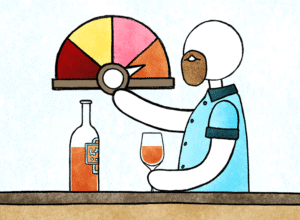 Wine for advanced users
How to Make an Orange Wine Without Making Crappy Wines
Nov 19, 2021 | BE THE FIRST TO COMMENT